Binoculars are a great choice for anyone into hiking, hunting, birding or even stargazing, but they have two important drawbacks – they’re frequently limited to a maximum magnification of 20x and a maximum aperture of around 70mm. So what if you need more power?

That’s where a spotting scope comes in. A spotting (or spotter) scope is designed to be both portable and powerful to meet the needs of anyone who loves the outdoors. But what should you look for when choosing a spotting scope? And which ones are best?

What Do the Numbers Mean?

(There are exceptions, of course. There are some binoculars that have a zoom magnification, but they tend to be of lower quality.)

When it comes to spotting scopes, you might see something like 20-60×80. This means the scope has a magnification range of between 20x and 60x and an aperture of 80mm.

Magnification, of course, means how much larger your target will appear through the spotting scope. Aperture refers to the diameter of the large lens that points toward your target; the larger the aperture, the more light it can gather. This may be an important consideration if you want to use the scope in low light conditions (for example, twilight.)

Why Use a Spotting Scope?

At this point, you may be thinking that a spotting scope is basically a telescope – and you’d be right, but there are a number of key differences. Firstly, modern telescopes are not meant to be hand-held, and the majority are designed to stay in one place. As such, they’re attached to tripods or some other mount, and while there are some that are designed to be portable, most are impractical for activities like hiking, where you are often on the move.

Another key difference is that a good quality telescope will reverse the view. This can be horizontally, vertically or both. If you’re into astronomy, this isn’t really an issue, but if you’re a hunter or birder, this could be a problem!

Here’s the reason why this happens: the lenses and/or mirrors of a telescope cause the image to flip as the light moves along its length. An additional lens or mirror is required to rectify the orientation of the image, but in doing so, this causes a slight loss of image quality.

Again, this is important for astronomy, but not so much for other hobbies. In astronomy, that difference in quality could make it difficult to split close, double stars or to see the finer details in nebulae, galaxies and other deep sky objects.

A dedicated astronomical telescope will therefore always avoid the extra lens and produce an inverted image. If you want to use the same telescope for a daytime hobby, such as birding, it’s possible to buy an accessory to correct the orientation, but it’s best to buy a telescope that’s been designed for that purpose.

Since a higher magnification isn’t typically needed for an activity like bird watching, the smaller magnification provided by a spotting scope is often more than adequate.

In short, an astronomical telescope is designed to stay in one place, produces an inverted or reversed image and is capable of high magnification. A spotting scope is almost always the opposite. Hikers, campers, birders and hunters can take their scope almost anywhere and enjoy the lower magnification, correctly oriented views better suited to their needs.

How to Choose the Best Spotting Scopes

There are a number of factors you should take into consideration when buying spotter scopes, but the key factors are:

For example, birders, hikers and astronomers will find it easier to use an angled spotting scope as the scope can be turned so that the eyepiece is in a comfortable position for the observer.

A straight spotting scope can be problematic for activities like astronomy, as the observer must essentially contort themselves below the eyepiece in order to look through it.

Straight spotting scopes are best used in situations where you might be lying on the ground for an extended period of time. In this case, looking straight through the telescope is a more comfortable option, rather than having to look down through an eyepiece that might be positioned at a 45 degree angle in relation to the telescope itself.

An advantage of straight spotters is that you can hold them up to your eye, like a traditional hand-held telescope. This allows you to observe objects at any angle above or below you, but without a tripod you’ll find the view could be a little shaky.

Like angled vs straight spotting scopes, which magnification and aperture is best for you depends on what you need the scope for.

Magnification really depends on how far away and/or large you anticipate your target being. Generally speaking, most users will find a good range of magnifications to be best, as this will allow you to see targets that are both near and/or large and more distant and/or small.

The possible exception is astronomy; a spotting scope can be used to help observers locate a target for a larger telescope, but otherwise many spotters don’t have the magnification or aperture for anything more than casual observing of brighter and larger targets.

When it comes to aperture, if you want something you can use at twilight, during the night or for casual astronomy, then a larger aperture would be better. Since aperture determines how much light the scope can gather, you’ll need as much light as possible under those conditions.

Since spotting scopes are designed to be compact and portable, the majority of them don’t weigh very much at all. On average, most weigh about 1.9kg (4.2 pounds), which is about twice as much as a regular set of 10×50 porro prism binoculars, but less than the average weight of most astronomical telescopes of a similar aperture. While this makes them a little heavy to be hand-held for an extended period of time, they’re perfect for hikers, campers and hunters who want something lightweight they can take with them.

There are a number of reputable manufacturers to choose from, with Barska, Bushnell, Celestron, Gosky and Vortex all producing a number of good-quality models. Of the three we’ve chosen, two of them are the Ultra from Celestron. Celestron is a very well respected manufacturer that specializes in binoculars and telescopes for all kinds of activities, and with decades of experience, it’s little wonder their products are so reliable. 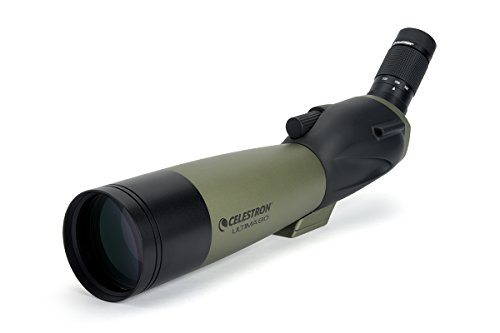 Celestron’s Ultima 80 scores top marks in a number of regards. Firstly, it has an excellent magnification range – from 20x to 60x – making it possible to enjoy outstanding views of targets both near and far. It also has an aperture of 80mm, so if you’re looking to use this under low light conditions, this is a good choice for you.

Astronomers will find the combination of magnification and aperture to be potentially useful for larger targets, such as the Moon and open star clusters, or wider multiple stars. Meanwhile, hikers, birders and hunters will appreciate its weight. At 1615g (3.5 pounds) it’s lighter than average, making it possible for the scope to be easily moved to a new location.

Lastly, as an added bonus, it’s available in both straight and angled models. 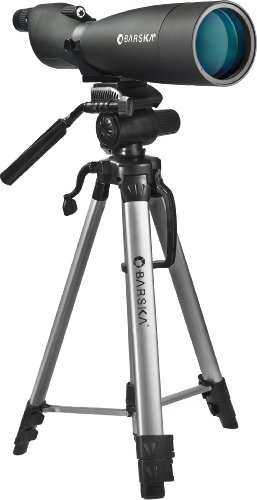 If you need something with a little more power, then Barska’s 30-90×90 Colorado Spotter Scope is the one for you. It boasts an impressive magnification range of 30x to 90x, and with an aperture of 90mm, it’ll work perfectly well under any light conditions.

There are, however, a few drawbacks. Firstly, the cost is a little higher than average, and you’ll also find this is only available as a straight spotter, so despite its magnification and aperture, this might not be the best option for amateur astronomers. 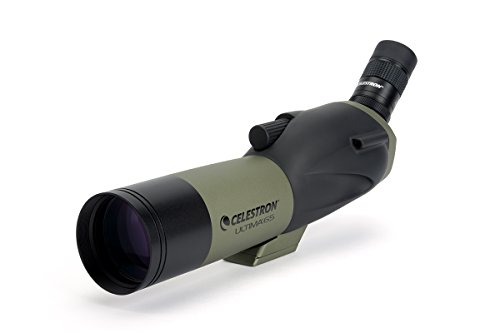 If you’re looking for a versatile spotting scope that’s half the price of our top pick, take a look at its smaller sibling, the Ultima 65. Besides having a slightly smaller aperture (65mm compared to 80mm) it also has a slightly smaller magnification range (18x to 55x, compared to 20x to 60x.) Depending on what you need it for, these minor limitations might not be too much of a problem.

Lastly, it’s lightweight – just slightly more than 1kg (2.3 pounds), making the Ultima 65 a great choice for hikers, hunters and birders looking for an inexpensive spotting scope. If there’s a downside, it’s that it’s only available as an angled spotting scope, but unless you need to lie on the ground, it shouldn’t be too much of an inconvenience.

Spotting scopes are the perfect solution for anyone needing more power than regular binoculars, but don’t want the inconvenience of a full-sized telescope. They have the greater magnification you need for better views, the larger apertures for low-light environments and the lightweight construction for easy transport to the location of your choice. Little wonder that birders, hikers and hunters swear by them!

What’s the difference between a spotting scope and a telescope?

Telescopes are really meant to remain in one place, or to be moved infrequently (if at all) during the course of several hours. They’re typically larger and more powerful, but their lack of portability restricts their use to astronomy or for enjoying scenic views from a permanent location (for example, your backyard, balcony or patio.) A spotting scope is lightweight and portable, while still providing the magnification and aperture needed for many outdoor activities.

Should I get a straight or an angled spotting scope?

It really depends on what you need it for. An angled spotting scope may be best in most scenarios, as it allows you to look through the eyepiece at high and low altitude targets without having to contort your body. However, if you need your scope to be hand-held or low to the ground, then a straight spotter would be a better choice. This would allow you to lie on the ground and look directly through the eyepiece.

Should I use binoculars or a spotting scope?

Again, this depends on what you need it for. If you need a higher magnification and intend to stay in one spot for a little while, then a spotting scope would be the best option. However, if you’ll be on the move, or want something you can use in a hurry, then you’ll be better off with binoculars.